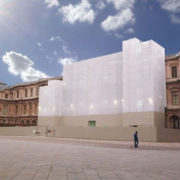 The Louvre is one of the world’s largest museums located in the 1st arrondissement of the French capital Paris. It is located just north of the Seine. It consists of three wings: the Richelieu wing, the Sully wing and the Denon wing. The museum belongs to the Réunion des musées nationaux et du Grand Palais des Champs-Élysées. For years, it has been world’s most visited museum.

Renovation of the Amiens Cathedral
Scroll to top